Social media is starting to take off its short pants.

ItÔÇÖs becoming all grown up. In fact, Facebook is now over 11 years old and heading towards platform puberty and is still the standout leader of the pack.

Google with its Google+ platform (with a development cost of over half a billion dollars) tried to take Mark Zuckerberg on, but it has become an incidental social network that isnÔÇÖt taken seriously by many marketers.

They play there but donÔÇÖt want to work there.

There are even rumours that Google is going to break it up into separate digital products by segmenting the components that got tractionÔÇª like Google hangouts and photos.

The biggest trend over the last 12 months has been the move from earned marketing attention (sometimes called free) to ÔÇ£pay to playÔÇØ. Another is the impact of social messaging platforms such as Snapchat and Whatsapp that have become ÔÇ£quasi social networksÔÇØ in their own right.

ItÔÇÖs a social web shift that is driven by a connected generation. If your Mom joins Facebook, then maybe itÔÇÖs time to play somewhere else. Teenagers donÔÇÖt want to be dancing with their parents. Right!

In fact the the instant services and chat apps now account for 3 of the top 5 global social platforms.

Facebook tried to buy Snapchat for $3 billion and was snubbed. But then they pulled out $20 billion out of the back pocket and bought WhatsApp. You just have to love deep pockets and a vision of what the future looks like. Mobile,social and alternative messaging.

The quick truth is that it can be summed up in one word, ÔÇ£mobileÔÇØ. Smartphone penetration has soared as it the devices have become more affordable and the wireless networks more ubiquitous and faster.

There are now 7.2 billion people on the planet and of those the following numbers make interesting reading. 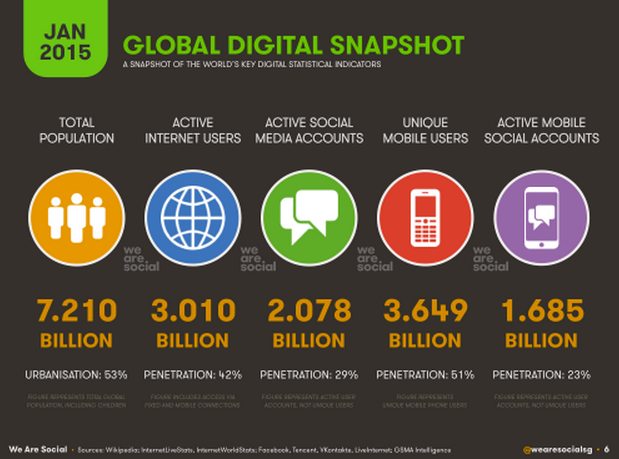 The rise of non English speaking social networks in China and Russia, such as Qzone, are producing large social networks that exceed Twitter, Instagram and Google+. The traditional social networks as we know them are not the only games in world wide social web town!

So what are the social media facts and statistics in 2015 that are worth checking out?

The developing world has not had the luxury of fixed wire internet from poles and wires. To provide access for the aspirational masses the mobile wireless networks are a fast track to a global world. Put up a tower rather than build an expensive fixed infrastructure.

So the mobile phone has made the web accessible for almost everyone.

You may scream at Facebook for its dominance and arrogance. But it canÔÇÖt be ignored.

Tall poppies are easy targets but the reality is that Facebook has cracked the social network code. ItÔÇÖs the ultimate beta business. Testing features in real time and snapping up online apps that push the boundaries of ┬áuse experience in a world that is about digital disruption.

Twitter is an accidental social network but donÔÇÖt be fooled. ItÔÇÖs a great brand awareness facilitator.

Google saw the writing on the wall but turned up to the party a little too late.

This network is owned by Facebook. They saw that social and mobile was a powerful intersection of synergies. They were right!

Pinterest has made the pinboard a virtual activity. ItÔÇÖs female centric and very visual.

LinkedIn dominates the professional social network segment. It is one of the oldest having started in 2002. Almost the grandfather of social networks.

Facebook maybe the biggest and baddest but there are many other social media facts and networks that shouldnÔÇÖt be forgotten. Both niche and non-English speaking.

What are you going to do?

Social media started with a few players that have now ┬ábeen empowered by another obsessive technology. Mobile.

The game is changing.

How can you use visual, mobile and messaging in your marketing? Instagram, Snapchat and Whatsapp are disrupting the game.

Looking forward to your comments..