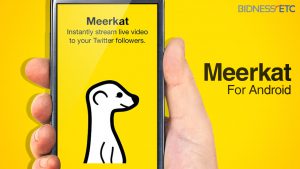 WhatÔÇÖs the value of the New Streaming Platforms?

Two similar apps recently took the social media universe by storm: Meerkat and Periscope. Both allow you to live-stream video directly from your mobile phone to the web. The real difference between them is that Periscope is from Twitter Inc. while Meerkat isnÔÇÖt, but Meerkat launched first and received $12 million in funding. If you Google those two terms together, you get over 1.5 million results (as of this writing), and theyÔÇÖve only been out for a couple of weeks.

All that hype is tough to ignore, and in the pressure not to get left behind on social media, plenty of businesses are already thinking up ways to work video streaming into their marketing programs. But for most publishers, a selective approach to existing social media platforms, with a careful eye on emerging ones, is likelier to pay off better than jumping on the latest bandwagon that rolls into town.

That isnÔÇÖt to diminish the significance of newcomers like Meerkat and Periscope. In some ways, the two apps are game-changers in the social media landscapeÔÇöanyone can now be a broadcaster from anywhere in the world. As long as you have your phone with connectivity, you can stream your thoughts, travels, anything. IÔÇÖve seen some pretty interesting streams, from behind-the-scenes feeds from more traditional broadcasters to a really good singer/guitarist at an open mic night in a bar in Vancouver that IÔÇÖm listening to as IÔÇÖm writing this in Florida.

Okay, I liedÔÇösort of. ThereÔÇÖs mostly pretty boring stuff, too. Plenty of younger users are on both platforms just talking about themselves. There are sunrises and sunsets, people walking around cities, going shopping, cooking, eating at a restaurant or just sitting around with friends. And even though thereÔÇÖs something thatÔÇÖs occasionally interesting, the main uses for these apps so far leave me unsure what to make of them yet.

But IÔÇÖm pretty sure that they have changed social communication in a big way and may eventually become part of the ÔÇÿtraditionalÔÇÖ marketing landscape in the future, just as Twitter and Facebook and Pinterest did when they first came out and marketers didnÔÇÖt know what to make of them at the time, either. For the present, I tend to agree with this sentiment over at Quartz:

But that hasnÔÇÖt led to reliably great content on Meerkat and Periscope. In our experience so far, some streams have been pleasant, such as a live view of TokyoÔÇÖs Shibuya crossing. Some have been amusing. Others have been grotesque, such as a man using the toilet. None has been worth watching for more than a few moments.

When something new comes out, we all get really excited and try and figure out how we can be one of the first people on it, build a following and sell lots of our products. WeÔÇÖve all done that, or thought of it.

HereÔÇÖs the problem with social marketing programs: the vast majority of businesses still donÔÇÖt have a clue when it comes to social media. Most publishers give very nebulous answers to the question, ÔÇ£Why are you on [Facebook/Twitter/Instagram/Google+/any other social platform]?ÔÇØ ItÔÇÖs often ÔÇ£because we have to be there,ÔÇØ ÔÇ£to build our brand,ÔÇØ ÔÇ£to speak to our customers,ÔÇØ ÔÇ£to create a communityÔÇØÔÇöall important goals but ones that break down on a tactical level.

Most publishers are driven simply by the feeling that they need to be there. On the other hand, when I ask publishers why they are using any other type of marketing program, there are usually very specific answers, mostly related to some form of customer acquisition or revenue.

Every single platform you are on, every tool that you use, every channel you fold into your marketing portfolio needs to fit within your overall strategy for selling books.

Should publishers be using social media to get the word out about their books and helping to drive sales? Absolutely.

But hereÔÇÖs the secret to having a great social media marketing program: You donÔÇÖt need to be on every platform. There, I said it. You have my permission to choose the platforms you are on selectively and carefully and choose to not be on others. And then really understand what will be involved in building out a following and driving sales and the most appropriate ways to use that platform for you, your markets, and your business.

If you are on a platform, you should be focused for the long-term with a full understanding of what you are doing, how you are doing it, why it is being done and what return you are expecting. ItÔÇÖs better to do one platform really, really wellÔÇöand build an audience that will help you sell your books just on that platformÔÇöthan to do multiple platforms poorly.

So what should you do about Meerkat and Periscope? Aside from downloading them to check them out? Nothing.

Unless you can clearly tell me how these platforms will fit into your overall strategy.