By Chris Day on 11 February, 2018 in Uncategorized

Oswald Mould  – Speaking at the Institute of Directors in London, England  at the launch of; ‘America the Beautiful – a State of Mind’ 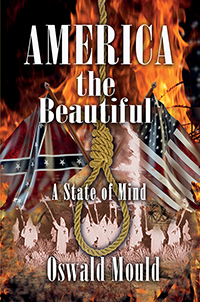 Good evening ladies and gentlemen. This is my book, “American the Beautiful”. And, I am trying to get it out in the marketplace to let you all know as much about it as possible. I am from New York, and one of the things that really got me writing this book are the things that are happening back in the United States, starting from the 1980’s.

I do not know if you saw or heard of the Rodney King beating by the police in the 1980s.(Many raised their hands to say they saw the video.) You all saw the video of Rodney King being mercilessly beaten by LAPD. Those things as an African American, as a West Indian, as anyone person of colour know were heart felt and it was the norm in our community. Because it was on video Each blow was seen and felt by the diaspora. Each blow related to us how we were seen, thought off, and would be treated by the police. We felt it, for its message transmitted all the thoughts of hate which white America held in their hearts to us. Our pain began since the origin of that nation. For centuries African Americans had to suffer the violence, indignities, disrespect, oppression of the United States of America. It came in form of four hundred years of slavery, one hundred years of Jim Crow which saw thousands of Black men, women and children, lynched by the Klan and their bodies desecrated, many burned at the stake, or shot to death. So even then when you saw this for the first time, know this, our suffering has been with us since the birth of this nation the United States of America. The pain has flared up as recently as the last unarmed black man, woman or child killed by the police. It is so current, it seems we have not had time to fully grieve before there is another recurrence. We cannot move on and so I write to relieve myself of my anger as I see modern day Klansmen acquitted for murdering unarmed citizens. I can speak about them because they affected me then just like these new atrocities affect me now. The heart felt pain of these incident motivates me to action but I ponder what effective action to take. I watched as people marched in protest and also observed those who rioted. Then not fully assimilated to the country, I did not totally understand, that the protesters were making a counter statement. I felt their pain as they tried to let the powers be know they would not continue tolerating their abuse. I wonder why they did not take up arms and fight, to later arrive at what they already knew; the futility and finality of that desperate thought.

Since then it became an epidemic in New York, Amadou Diallo to Eric Garner. The use of deadly force has become a pandemic all over the USA. According to the Tracker which keeps count of people killed by the police in 2014 115 black men women and children were killed by police officers making for one third of the people killed by the police in the USA. In 2015 it was 105 unarmed black citizens. This will get worse before it gets better because prosecutors who works arm in arm with the police officers have had the laws changed so they prosecute the cases of police shooting within their districts instead of having an independent councillor and investigator. That is why these cases always end in police acquittals. These changed laws now prevent justice from being served.

According to many of those who oppose local prosecutors handling these cases involving their own police colleagues, a centuries-old legal principle is being denied. Perhaps most famously articulated by US supreme court justice Felix Frankfurter in 1954, it holds that justice alone is not sufficient: “Justice must satisfy the appearance of justice.”

So, the killings of unarmed citizens continue at an alarming rate. It went from being an epidemic to a pandemic happening all across the nation. As we became more awakened by these, we began to learn more about them. It’s not something new.   I decided to do something. I wanted to get out and march but I have a hip problem, and I can’t walk for long distances. I wanted to protest. I wanted to be out there with the people protesting the death of Eric Garner, Tamir Rice as well as Philando Catille. But since I couldn’t, I decided to do something, which was to write. I’m a retired nurse now. One of the things about nursing is that you’re constantly document anything and everything that you do for patients. If it’s not documented, it’s not done. So doing this for years, I became comfortable with writing. I decided to write this book. “America the Beautiful A State of Mind”

I’m going to read you a bit of the Reader’s Report which was done by Wendy York my editor.

She says, ” The reader is taken inside a psychiatric unit and experiences the lives of the patients, through one of the lead characters who as a patient, tells his life story to the nurse caring for him. The story begins when the main character is ten years old and he is forced to watch the hanging of his father and uncles by the Ku Klux Klan. The story, which is set in the real historical context of the 1950s, reveals how this experience affected him for the rest of his life. And as the book progresses, the reader shockingly discovers that the main protagonist actually seeks some level of atonement or redemption for his many killings and murders.

The first chapter in the book, takes you back into the late 1950s, where this young man actually witnesses that incident. Those incidents however, were common happenings in the United States of America for centuries. It is noted that from 1880 to about 1965 there were almost 5,000 lynching or hangings USA. The victims of 75% of them were black men, women and children mostly in southern United States America. So, Black Lives have been considered disposable by the white population ever since the creation of this union. But that undocumented edict is now coming to light because Social Media has exposed the ongoing unnecessary police use of deadly force against Black citizens. It can no longer be denied because there is overwhelming supportive evidence. Now there are groups who are tracking and documenting police use of deadly force. This in turn is forcing the conversation of police training and even the vetting of police applicants.

I’m talking to you all about this, because as human beings we’re all from one cloth, from one thing, from one … and if something affects me as a black person, believe me, it affects you too. Although it seems like the things that are affecting us seems to be distance from your world it does affect you. Now it’s for you to take the initiative to understand our woes, and know that supporting the police officers does not mean that you must condone their illegal oppressive behaviour against us. Remember justice must satisfy the appearance of justice. All those acquittals of police officers use of deadly force does not satisfy the appearance of justice. Murders were committed and not because you and them share a commonality of colour means you must disregard their crime s against us and set them free. No, we are humans first not white first. We are not the depraved criminals the media make us out to be so don’t be complicit and believe everything said by the police after they have used deadly force. Have an open mind and support Humanity over white supremacy.

I would like for you to read my book. It’s a historical thriller, and it will engage you. It will make you think about it. It will make know of some of our life experiences.  My main character’s goal in life in life was to live a life of dignity with respect, to be prosperous and attain equality. In the book through his life journey during his senior year in high school with his classmates on a school trip he goes to Washington DC. There he visited all the famous monuments including The National Archives. There he reads the Declaration of Independence that was on displayed. One particular sentence grabs his attention. It says, “We hold these truths to be self-evident, that all men are created equal, that they are endowed by their Creator with certain unalienable rights, that among these are Life, Liberty and the pursuit of happiness.” He lived for that. He fought for that. He killed for it, and he was willing to die for it in his unquestionable service for his country.

His journey through life took him through the Vietnam War, where he was a decorated soldier, and when he came back to the United States he had to fight for his right to be treated as a human being and a citizen of the United States of America.

‘America The Beautiful A State of Mind’, I hope you enjoy it. Thank you for allowing me to speak.