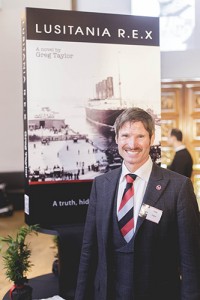 The winner of the M. M. Bennetts Award for Historical Fiction was announced today at the Historical Novel Society Conference in Denver. Originality of subject and characters, depth of research and excellence of literary style were the criteria. From among an exceptionally broad field of subjects, which ranged from novels on the Aryan Heresy and the dissolution of the empire of Alexander the Great to domestic life in the camps of Genghis Khan and early logging camps in Oregon, three finalists were chosen.

These were The Prince’s Doom on the politics and hazards of noble life in 15th-century Verona; Lusitania R.E.X, a speculative novel focused on the mysterious second explosion that doomed the Lusitania; and This Old World on a small, pioneering utopian community and its struggle to survive after the American Civil War.

The winner is Lusitania R.E.X by Greg Taylor. European nobility, obscure Russian scientists, American millionaires, horse racing, Yale’s Skull and Bones Club and early rocket science figure in this complex tale. A wide assortment of vivid characters, unrelenting pace, and an intricate narrative composed with clarity and a persuasive thread of cause and effect have distinguished this novel above the very laudable competition.

Using the novel form to explore one of the mysteries of recent history, working from private family archives including those of such notables as the Vanderbilts and the Duke of Marlborough, Taylor has assembled a highly plausible portrait of the uses of private capital and social influence to effect matters of international importance, a subject pertinent today and at all times.

Remarkably, this is Taylor’s first novel. Studying history at Williams College in Massachusetts and the University of Durham, Taylor went on to attend the School of Management at Yale University, where he lived one block from The Tomb, the headquarters of Skull and Bones, an organization that figures prominently in Lusitania R.E.X Taylor says he was drawn to the tale of the Lusitania, fascinated by the collapse of Edwardian society, the epitome of elegance, in the brutal warfare their own industrial success had made possible. His passion for his subject moved the Vanderbilt family, the Duke of Marlborough and others to open to him family archives previously unavailable.

Coming from Colorado originally, London has been Taylor’s home since 2000. He is an investment banker and financial asset manager, founder of Sequoia Investment Management.

The M.M. Bennetts Award for Historical Fiction has been created to honor author M. M. Bennetts whose two volumes on the British intelligence service during the Napoleonic Wars are models of extraordinary, in-depth research, broad evocation of life of the period and literary excellence. In August 2014, while engaged in research for a much-awaited third volume in the series, Bennetts succumbed to cancer. The award is intended to further the standards of research, literary quality and originality in the historical fiction genre.