By Chris Day on 2 September, 2018 in Uncategorized

The Pigeonhole is the global book club in your pocket 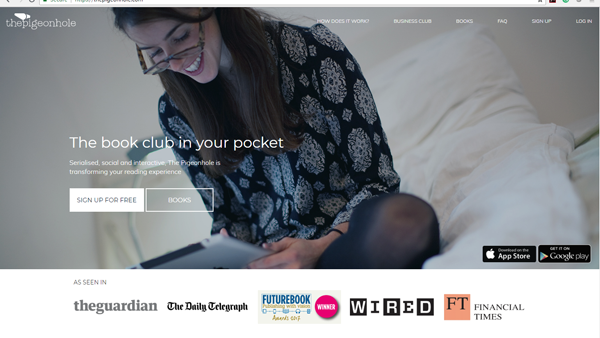 The Pigeonhole is the book club in your pocket. A book was once the best means of mass communication; now it is the phone. But there is no longer a need to choose between the two. The Pigeonhole is at the forefront of a new era of mobile reading, launching our titles in bite-sized instalments, or staves, designed to fit into every reader’s life. 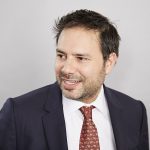 The founder is Jacob Cockcroft who will be coming to talk to Authorcraft on October 23rd. Not to be missed!

Jacob is a lifelong book addict with a passion for blending the old and the new. With family origins in Zanzibar, he is a reformed corporate spy. Working extensively across Africa, he saw firsthand the potential for mobile reading across emerging markets. Jacob runs all things product and business development to do with The Pigeonhole, increasingly fielding requests from international publishers to set up local Pigeonholes!

A book was once the best means of mass communication; now it is the phone. But there is no longer a need to choose between the two. The Pigeonhole is at the forefront of a new era of mobile reading, launching our titles in bite-sized instalments, or staves, designed to fit into every reader’s life.

We work with some of the biggest publishers in the world to bring our users the best in modern fiction. From bestselling authors like Minette Walters and Ken Follett, to exciting debuts and new voices, The Pigeonhole has your reading covered. Each serialisation is accompanied by bonus content – from interviews with the author to audio staves, playlists and photographs. Meet with the author and other readers inside the book as you read and comment on the book in real-time.

Launched in September 2014, The Pigeonhole has been nominated for the Digital Innovation Awards at the London Book Fair, Future Book’s Digital Campaign of the Year for its work promoting Ken Follett’s A Column of Fire, and its founding editor Anna Jean Hughes was named as a Rising Star of the publishing industry by The Bookseller magazine.

SUCCESS STORY – as reported in The Bookseller

Pan MacMillan has partnered with The Pigeonhole for its most successful fiction competition to date, to offer fans the chance to read along with Ken Follett ahead of the launch of the author’s A Column of Fire. The flash of digital innovation rounds out 10 months of campaign planning, with the aim of driving awareness and pre-orders as well as garnering long-term brand ambassadors.

Pigeonhole book club members receive books in short episodes (or “staves”), at regular intervals on their mobile devices and are able to comment on texts they read through the platform. Since 24th August, competition winners have read one stave every two days, each launched with a personal email from Follett, and discuss the text with fellow readers. The author logs in regularly to weigh in on questions, which has gone down well with superfans. He has also recorded a series of videos, peppered through the text. One reader said: “I have been in love with Ken Follett’s work since the first book… This is a dream come true.”

With over 350 participants, it is The Pigeonhole’s most read and commented-on book yet, and it’s also delivered a data surge for Pan Mac. The email launching the competition had a 59% open rate and yielded 2,700 entries and a 30% increase in sign-ups to the publisher’s newsletter database. Its head of fiction marketing, Sarah Arratoon, commented: “We will use the data and insight to help enrich our Ken Follett-specific channels by keeping in touch with these fans as brand ambassadors.”

The serialisation finishes on the day of publication, thereafter readers will have two weeks to finish the texts before they disappear from their digital bookshelves. The Pigeonhole anticipates that by that point readers will have viewed over 250,000 screens of the text, not including those reading online. Asked if it was difficult to persuade Follett to commit the time to the project, publicity director Philippa McEwan said: “We always present a clear proposal, and we gave Ken examples of ways in which The Pigeonhole has worked in the past and how the project would complement the other activity and promote the rich experience of the book.”

The full campaign has three pillars (Follett fans will excuse the pun): a major announcement campaign in November 2016 comprised retailer pre-order videos and traditional PR and outdoor campaign plan- ning; then an advertising rebrand with a cinematic look was aimed at fans – including TV and film – of the wider historical genre; and finally, the digital element (#ReturntoKingsbridge) sought to bring loyal fans to the heart of the novel. Arratoon said: “Working with The Pigeonhole is the perfect opportunity to broaden the channels through which readers can experience Ken’s work.”

The companies have previously collaborated on smaller campaigns, a method of partnership-building that can be seen across the industry. Before jumping into a huge endeavour with a new partner, publishers are testing working relationships and trust on smaller-scale projects first.

Pigeonhole co-founder Jacob Cockcroft said: “Connecting a bestselling author like Ken with his superfans has unleashed an incredible amount of energy, enabling readers to express their passion and excitement. This must surely be the world’s biggest synchronised reading experience to date.”

And it seems to have worked. In the words of one reader, “I hope more authors will use this type of interaction between themselves and their readers”. Publishers, get cracking.