Donna Thorland, author of the Renegades of the Revolution series from Penguin NAL has┬átaken advantage of┬áTwitterÔÇÖs new native┬ávideo┬áplatform to promote her latest book. 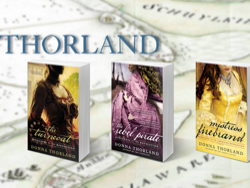 By uploading a trailer for the book from her phone, she was able to tweet the trailer directly to her audience from within the social network. ÔÇ£I actually repurposed an existing trailer for one of my┬ábooks┬áto fit the 30 second time frame,ÔÇØ Thorland explained in an email to GalleyCat.